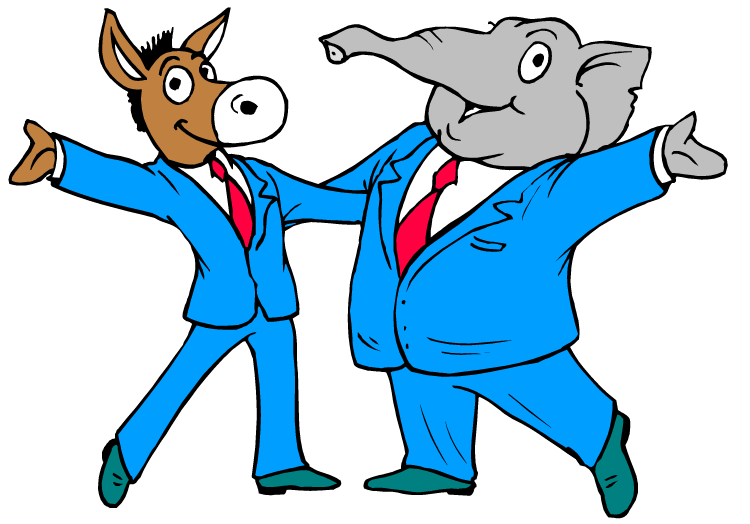 Democrats are better lovers than Republicans, an opinion poll has found.

The poll of 900 American singles found by a two-to-one margin that Democrats are better in bed, with 49% of the respondents saying that President George W Bush is the best-looking candidate while 53% of the women imagine that challenger John Kerry would be the better kisser.

And, despite what people might say, it is all right to talk politics on the first date, according to 63% of respondents.

It’s also fine to put your political cards on the table, with 57% of 1001 singles surveyed by another poll saying that they would marry someone with different political views.

Both polls were conducted by Match.com, an online dating service.

The Pentagon is shaped that way so nobody can hide in a corner when they have a kitty for the ‘kawfee’ machine. John Kerry a good kisser? He has a face like a cross between a weary carthorse and a jaundiced Boris Karloff. Bush always looks like he should be selling second hand cars or double glazing. Now we have half of Hollywood joining the senate.

Clint Eastwood and ‘Arnie’ from ‘000wwwwstria’ rallied and won for the American populous vote. ‘Clint with a Squint’ has been quietly dubbed a super governor. He was only badly dubbed in ‘spaghetti westerns’. Half the Mexican Bandits were either in the wrong film, or Welsh. As for Arnold Schwarzenegger? Well, he’s not exactly the brightest screensaver in the world is he? About as sharp as a marble. After all that pumping iron and scrambling his brains lifting dense material he has become much the same. In the gym he probably has the IQ of an Irish amoeba who survived the potato famine because he was a picky eater. Out of the gym he has a brain and expensive suits that both, fit, where they touch.

How can you talk about American foreign affairs living as a foreigner in America? How can he create world peace with a name like ‘Terminator’? How can he be taken seriously when he speaks like he’s got a mouthful of Brie and a smile like a vandalised graveyard? His body is shot now, anyway. His years have over taken him and he has to stay at home and do his homework, puffing on Havana’s. No more time to ‘rip’ on the bench press anymore. He may be a screen hero, but he still only has a tiny penis and I can prove it. I tried squat thrusting a case of beer once, and my ‘wedding tackle’ got stuck in my throat. This is what happens to musclebound people with disappearing genitalia. If God had wanted us to look like a weather balloon filled with steel beach balls then ‘He’ would have had us all breast fed on over-inflated earthmover tyres full of whale sperm.

I know women go for powerful and wealthy men. Even Michael Winner did ok for a while with Jenny Seagrove. Ever since the Railway Children I’ve wanted to be disgraceful with her. As a child I fiddled amongst my stiff serge short trousers thinking of her in her liberty bodice and baggy socks. I longed to forage in the folds of her eight layers of petticoats. What happens? She marries a fat grey headed bastard who smiles all the time like he has a Bishops thumb up his arse.

Sir Jeffery Archer who embezzled money from boy scout associations, fiddled charities, knobbed prostitutes and committed perjury in the Highest court got the girl. But his most heinous crime was to write a bunch of crap beach bunny fiction that told the world how he did that shit in ‘real time’ in the first place. Archer was a pathological lying fraud. A traitor to his own peerage and the entire nation trusted him.

He still has the most adorably attractive and loyal wife. I have heard of ‘treating them mean to keep them keen’ but he is lower than a snakes belly and she still stands by him? What am I doing wrong? My wife pretends not to know me at customs and I’m a Demi God!!

My fantasy is to have Mrs Archer and Christine Hamilton (because her husband has the attraction of very nasty fungal infection in the groin area) smothering me in Greek yoghurt and eating ‘Hundreds and Thousands’ off every inch of my body, while I squirm with pleasure.

Then we all take our clothes off and get them professionally cleaned. It’s true. Women love powerful men. But men feel threatened by powerful women. That’s the only reason why Cliff Richard has never married. Sure, Olivia Newton John was on the cards for a while, until she became the Pink Lady in the cult 70’s film classic ‘Grease’ and you couldn’t see Cliff’s narrow little self-obsessed arse for dust. Any woman that spends more time on her appearance than him has got to be a complete wanker.

Look at Pierce Brosnan. 14 children faithful to the same woman. Doesn’t stop him burying his salami in Bond movies in, very much more snug surroundings. Paul Newman is another one. 90 years old and driving racing cars, ever faithful to his long suffering wife. Beware of his salad dressing,though, it gives you Buffalo breath, and the little bits get stuck behind the dentures. Making you shit like a lion and soil your underwear.

Hollywood women are filling their Jacuzzis with formaldehyde to chase the dragon of eternal youth. Graveyards are full of impostors with birth dates conveniently missing or tampered with. On the stones that is. Which reminds me! Mick Jagger & Keith Richard banging out sprogs! Is Viagra the only drug they never tried before? The babies are doing well. Fed on a pot of pea & carrot Gerber, with a line of sherbet! Well, if the Stones are still rocking then so am I.

Here are of my favourite women dead and alive, past and present.

The woman from the Scottish Widow advert.

The woman from the old Somerfield supermarket advert. (Or are they both the same person?)

Barbara Cartland, because she always looked to me as if she had fell into an over decorated birthday cake, but I would bet she tastes of Lily of the Valley in all the most important places.

Joke:
A Father and his son go to the pub for a manly chat.

Son: “Dad I really would like to marry Sally from the supermarket. She’s lovely in gingham.”

Dad: “Well son. When I was your age I had a bike. I got around a bit in this village. You can’t marry her. She’s your half sister.”

Son: “Errr. Ok. Then what about Mary Wilks from ‘tut’ tavern on ‘tut’ corner (this is the dialect of Bradford people). She plays the pink clarinet, thou knows?”

Father: (choking on his beer and chaser with cigarette) “No, Son, I forbid it. Her Mother and I had weekly visits to the clinic. We could have populated the whole of a South East Asia if so much hay, hadn’t got intit!”

Son: “Well, that narrows it down. What about? Shagbag Sharon with the green teeth and big bloomers?”

Father: “Out of the question, boy. Her Ma never shaved but I liked the continental look. After all, she had nipples like helicopter ports.”

The two vacate the bar and the son walks home sobbing. Distraught, he falls through his front door and into the arms of his waiting Mother. The father stumbles upstairs to bed.

Mother: “What ever is the matter, boy?”

Son: “Daddy, says I can’t marry Sally from the Supermarket. Mary from the tavern, or Shagbag Sharon.”

Mother: “You marry who you like, son. He doesn’t know who your real Father is, anyway!”

This site uses Akismet to reduce spam. Learn how your comment data is processed.